It is not uncommon for people who are just learning how to smoke a cigar to feel sick during their first smoking session. Nothing to beat yourself with, even old-time aficionados do get sick sometimes from smoking very strong cigars they are not accustomed to. 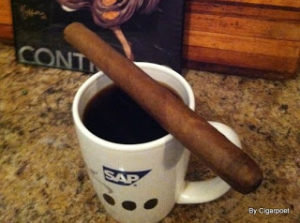 Simply put, nicotine overdose. A stick of cigarette contains around 1 milligram of nicotine. A large cigar (a torpedo or a Churchill for example) contains nicotine that’s equal to 2 packs of cigarettes or even as much as 400 milligrams of nicotine.

Ok, here’s the lowdown on nicotine. According to 3DChem.com, a leading authority on the composition and molecular structure of chemicals, nicotine is a naturally-occurring substance found in the tobacco plant. It is a “potent” nerve toxin and is actually a common ingredient in many insecticides!

Ingested in small doses, nicotine is a stimulant that affects both our central nervous system and peripheral nervous system. Depending on how much and how often you smoke, nicotine can both relax and invigorate a smoker. This “biphasic” effect of nicotine is not uncommon, according to Ann Meeker-O’Connell, an expert at How Stuff Works. This is also what makes the substance highly addictive.

Ok, that’s the worst of it so far. If you’re still with me, and you still want to learn how to smoke a cigar, let’s move along and see how you can avoid cigar-smoking sickness or nicotine overdose.

James Yee, a leading expert on Cuban cigars at AllExperts.com, offers the following tips for cigar smoking beginners not to get sick from their first cigar smoking experience:

I also find drinks like an ice-cold 7up as having the same clearing effect as James’ glass of ice water. Perhaps, the most effective measure of preventing sickness for someone just learning how to smoke a cigar is sugar-loading. Of course, this won’t do if you have sugar-averse health conditions (like diabetes mellitus), but sugar is an antidote to nicotine overdose. In fact, if you try to observe the old cigar smokers in the Caribbean, they carry cigar cubes with them and just pop one as soon as they start to feel a bit queasy from cigar smoking. You can ingest raw sugar when you feel like getting sick or, if you’re not comfortable with the idea, just sweeten your espresso a notch higher or have a sugary drink while you smoke.

Over time, as you mature from a beginner learning how to smoke a cigar to a veteran cigar smoker, you’ll also observe that you have progressively developed a high level of tolerance to nicotine. This is gradual, however, so beginners are better off following Yee’s advice and starting with the mildest cigars until they are able to handle the stronger ones. Even among veteran cigar smokers, an occasional unfamiliar cigar comes along that can bring out more than a light buzz.