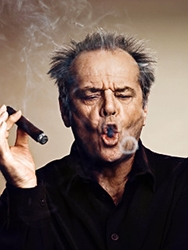 Cigar lovers indulge in the pleasure of smoking cigar for different reasons, in different places – alone or in the company of good friends. Indeed. Some people prefer to smoke alone while others will enjoy their favorite cigars only in the company of cronies. While it’s important for you as a beginner to learn how to smoke a cigar the right way, it’s equally important for you to know the social practices – the etiquette of cigar smoking.
For many, myself included, cigar smoking has been elevated into a kind of ritual, assiduously and unfailingly observed at the appointed time. I smoke my favorite cigar at 5:30 sharp every Saturday afternoon – outside – in my favorite chair facing the sea (when the weather is fine). I smoke slowly, enjoying the delicate and complex flavor, fully relaxed. This is the time for me to reflect on the events of the past week and plan new activities and projects in the coming one.
But enough of this discussion of my personal cigar smoking habit. My point there actually is not about the meditative aspect of my smoking, but in highlighting the fact that I smoke outside the house, which brings us to the first social aspect of cigar smoking.
Where to smoke? Cigar smoking is one of the most pleasurable experiences known to men (and to some women), but we must face the fact that not everyone will appreciate the odor of cigar smoke. Cigar smoke clings to the fabric more tenaciously than cigarette smoke. At home, it is best to smoke outside rather than befoul the inside of your own house with the odor of stale smoke and cold tobacco. This applies to public places too, where many do take the anti-smoking policy of certain establishments quite seriously. You don’t want to offend with your new pastime, do you?
Band on or band off? In the US, this is generally a non-issue, you can smoke as you please. In some countries though, notably in the UK, there are still a lot of circles who consider it bad form to leave the band on. Basically it’s interpreted as flaunting or making a big deal of the brand you are smoking. If you choose to remove the band, wait until the cigar is lit. The heat of the smoke will gradually reduce the adhesive and you can discreetly remove the band shortly.
As we discussed earlier, flicking your cigar to dispose of the ash prematurely, much like in cigarettes, is unnecessary and faux pas to some people. Cigar ash is sturdier than cigarette ash and can last longer since cigars are more densely packed with tobacco. In fact, the longer the ash the better the quality of the cigar is. Cigar ash also provides a sort of an air block that helps in cooling your cigar. If you’re uncomfortable with waiting for the ash to fall on its own weight, you can tap the cigar lightly on the ashtray every 1/2 inch or 1 inch of ash build-up.
When you’re done, don’t put out your cigar by crushing it on an ashtray. It’s not a cigarette. Just put it on the side of the ashtray and allow it to go out on its own. Dispose of the stub immediately to avoid leaving the tenacious smell of cold tobacco.
If you want to smoke another cigar, wait for about 15 minutes. Don’t light up the next one as soon as the first one is finished. Cigar aficionados consider “chain-smoking” cigars or lighting up right after your first cigar is done, as compulsive behavior and in bad form.
As a beginner learning how to smoke a cigar, you don’t need to be boxed in by any social rule or norm. In the privacy of your home, you can smoke a cigar as you please, but believe me, observing basic cigar etiquette even when you’re alone can immensely enhance the pleasure of cigar smoking.