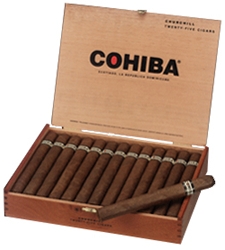 In 1982, former Cuban president Fidel Castro introduced the Cohiba cigar to the world. Before then, only dignitaries, diplomats, high-ranking state officials, and close friends of Castro knew about or were able to smoke this elite of cigars. Today, more than 20 years later, the Cohiba has gained cult status and has amassed a loyal following of hundreds of thousands of aficionados worldwide who will attest to the exquisite taste of this most expensive of Cuban cigars.

The word “Cohiba” is believed to be a derivative of the Taíno word for tobacco. The Taíno people inhabited some of the islands in the Caribbean before Columbus arrived in the Americas.

Perhaps, no other Cuban cigar is as closely linked to the saga of Fidel Castro and the Cuban Revolution than the Cohiba cigar. It all started in the early 1960s, Castro has just successfully demolished the Batista plutocracy and has defeated the Kennedy-sponsored invasion by Cuban counter-revolutionaries at the Bay of Pigs. At that time, Castro noticed one of his bodyguards, Bienvenido Perez, smoking a particular kind of cigar that the president found to be “very aromatic, very nice.” When asked about the cigars, Perez confided that those were actually nameless cigars rolled by his friend, Eduardo Rivera, a cigar roller at the La Corona cigar factory in Havana.

Castro then summoned Rivera, and asked him to start a small factory in a tightly guarded mansion, just outside of Havana. Their task was to roll high-quality cigars from the best Cuban leaves available – exclusively for the president. This was how the “nameless” Cohiba cigar started its journey to become one of the most prized cigars among aficionados worldwide.

The “Cohiba” brand name was only applied to the cigars produced in Rivera’s factory in 1968. By then, the American embargo against Cuba was already in full effect, and in any case, Cohiba cigars were only available to Castro, his family, high Cuban government officials, and members of the international diplomatic corps assigned to Cuba.

In 1982, the Cohiba cigar brand was finally introduced for public consumption. Initially, only three sizes (vitolas) were produced: the Cohiba Panetela, the Cohiba Corona Especial, and the Cohiba Lancero, all personal favorites of Castro. Along with three more sizes added in 1989 – the Cohiba Robusto, the Cohiba Exquisito, and the Cohiba Espléndido – these became known as the Línea Clásica (classic line). Since then, two more lines (La Línea 1492, the Maduro 5 Series) and special releases (Edición Limitada Releases, the Millennium Reserve, and Behike) have been introduced. 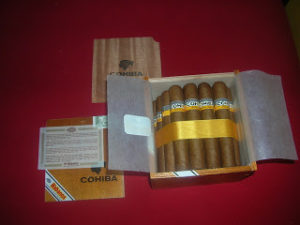 The brand name Cohiba has its own share of controversy, too. You might have seen or smoked a Cohiba cigar rolled in the Dominican Republic. When Castro prevailed in Cuba, and his regime nationalized the Cuban cigar industry, many of the original cigar makers, factory owners, and their families fled to neighboring countries like the Dominican Republic, Honduras, and Nicaragua.

Many Cuban cigar brands today have their own counterparts in these countries, but Cuba has successfully kept the Cohiba trademark in most international markets. In the United States, Cuba continues to work towards regaining full rights to the trademark after it was awarded to a US company in a Court of Appeals decision in 2005.

Today, Cohiba cigars are celebrated in popular culture and in the powerful business and political circles worldwide. Artists like 50 Cent, Fat Joe, and Lil’ Wayne mention it in their songs. King Juan Carlos of Spain is said to be a VIP customer of Habanos SA, his cigars are supplied with a special ring depicting that country’s coat of arms. The Cohiba cigar, which originated in Castro’s revolution against the elite and the decadent, has come full circle at last and has ironically become a symbol of power and prestige among those very elite.