The artistic world of big Hollywood relieves tension and stress with the help of large aromatic cigars.

At all times, the cigar was a loyal and reliable companion of bright representatives of musical and artistic Bohemia. Probably because movie stars, famous Directors, singers and top models are genetically predisposed to everything beautiful and refined, they know well what style and good taste are. Cigar for them is not only part of the image, a pleasant pastime, and the opportunity to become their own in a circle of favorites. It helps some celestial beings to plunge into a friendly atmosphere, or, as Claudia Schiffer very correctly noted, to become a part of the General mood, to feel in the maelstrom of events. For others – it is a sure way to relax in privacy, take a break for a while from pressing problems and hard work. The list of cigar lovers who have become famous in the art world is quite impressive. Let’s focus on individual persons and personalities. Let’s start in order of seniority with the veterans of the giants of Hollywood.

Jack Nicholson
The greatest artist of all time, Jack Nicholson, appreciated cigars at a rather late age. An avid golfer, he smoked half a pack of cigarettes in just one round, and as a result, excessive nervousness interfered with athletic success. Then Nicholson decided to switch to cigars, they helped to pull himself together and achieve a good result. And for the first time the artist tasted the taste of high-quality tobacco during the filming of the film “Last details” in the early 70s, his character according to the script had to smoke cigars. Nicholson tasted it and got a taste of it. Currently, the winner of an Oscar and other high-profile cinematic trophies is a fan of Cuban “havans”, among his most favorite brands – Montecristo, Romeo y Julieta, Cohiba. He regrets that the ban on the import of Cuban products to America has not yet been lifted and it is necessary to buy favorite sticks in Canada and other countries. The impressive size of the humidor helps out, thanks to which you can store the collection for several years and treat your colleagues to cigars produced on the island of Freedom.

Michael Douglas
The legendary American actor, who has the appearance of an aristocrat and the cold eyes of a wall Street businessman, considers a cigar a great way to relax and tune in to a philosophical mood. In addition, the world of big smoke helps him gather his thoughts, work on the role, and adjust his plans for the future. Douglas also likes to smoke cigars in the company of friends, likes to discuss and compare the taste and aroma of different brands. As for preferences, they are traditional for Douglas. Artist and producer smokes a Romeo y Julieta, Montecristo No. 2, Cohiba, H. Upmann, though, does not shy away from trying products from other countries, especially when new products are brought by friends from long trips around the world. The company of a cigar is usually a glass of good wine, Douglas is well versed not only in cigars, but also in alcoholic beverages. Michael Douglas prefers to taste “Havana” in the company of such mega-stars as Arnold Schwarzenegger, Danny DeVito, Bruce Willes.

John Travolta
The hero Of “pulp fiction” and one of the brightest stars in Hollywood, John Travolta regularly appears in films with a cigar in his teeth. In real life, he is also a big fan of the fragrant big smoke. The passion was inherited. All his life, his father smoked cigars, the smell of tobacco was constantly present in the living room, creating an indescribable home atmosphere, and John Travolta continued the family tradition. Smoking for him is one of the few weaknesses that the actor allows himself, a kind of ritual and pleasure. Five cigars a week is the weekly rate. He prefers to smoke in the evening, sitting comfortably on the terrace of his own house with a Cup of coffee. Favorite brands are Dominican Davidoff and Cuban Montecristo. 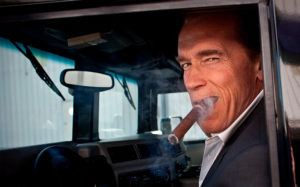 Probably, iron Schwartz of all the famous artists and leading politicians is the most ardent and consistent fan of fragrant smoke. For him, a cigar is an important part of life, allowing not only to enjoy the process, but also to solve important issues, including at the government level. A living legend of the world cinema has repeatedly stressed in interviews that the cigar helped him communicate correctly with people, including well-known politicians. Recall that Schwarzenegger served as Governor of California and quite successfully coped with this role. He set up a “Smoking room” in the government building, using it as a reception area. I met with important people there, solved problems, extinguished conflict situations during breaks. After finishing his political career, Terminator is still actively fighting for the rights of smokers, including the abolition of the ban on smoking in public places. On the air of the TV show, he gives master classes on the correct handling of a cigar. As for personal preferences, Schwarzenegger, his favorite brands are Davidoff, Hoyo de Monterrey, Romeo Y Julieta, Cohiba, Punch. 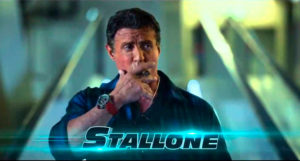 Sylvester Stallone
Another cult “old man”, a fighter with a pile of muscles and a killer look, Sylvester Stallone, smokes a few cigars a day, but prefers not to advertise his hobby, considering it a purely personal matter. He likes to smoke in silence and privacy, enjoying the process. Interestingly, unlike his star colleagues, he prefers the Dominican brand, Arturo Fuente. Iron Sly especially likes the line of strong 100% Dominican cigars Fuente Fuente Opus X, which he considers exceptional. But Stallone is indifferent to the products of Liberty island.
Fans of cigars are also Bruce Willis, Pierce Brosnan, Harrison Ford, and other equally famous actors of the older generation. However, this does not mean that the fascination with the world of big smoke is peculiar only to veterans of the scene.